The first cookery book I can remember acquiring was The Colour Book of Vegetarian Cooking, edited by Carole Handslip. I have the 1984 reprint. 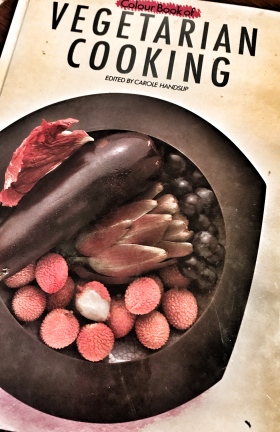 In Upper Sixth, I turned vegetarian and this little recipe book was bought for me for my 19th birthday by first year uni friends, Jayne and Sarah. (Allow me to clarify. I didn’t have some catastrophic falling out with Jayne and Sarah in first year which meant they weren’t also second and third year uni friends. The rather more prosaic story is that I didn’t last beyond Easter of first year in my initial attempt at university.) I had spotted this cookery book in the remaindered bookshop in Bath and Jayne and Sarah bought it for me.

By today’s standards, it’s a pretty slim volume, with only about a third of recipes accompanied by a photograph of the finished dish. But, in my early years of being “a veggie” I turned to it often and, as a consequence, it is well-thumbed and more than a little grubby. Indeed, the page for gnocchi with tomato sauce and that for corn and asparagus flan – neither of which I have ever made – had quite welded together and I had to separate them with great care; with great care and a serrated knife.

Many of the recipes have egg and dairy as principal ingredients, but there’s a sub-chapter dedicated to nut and pulse dishes, so I headed there. I opted to make the bean and tomato hotpot,

adapted to account for my lack of a large leek (a shallot, green pepper found idly withering in the crisper drawer, chopped-up stalk of broccoli and additional carrot made for gallant stand-ins) and eschewing of butter. I also doubled the quantity of tinned tomatoes and chucked in a tin of butter beans in addition to the kidney beans (yes, more Amazon Prime inadvertent bulk purchases, thanks for asking). I found a bag of Apache potatoes sprouting nicely in the back of the fridge, so once I’d “de-eyed” them, they were halved for the hotpot topping.

This really was a very easy cook 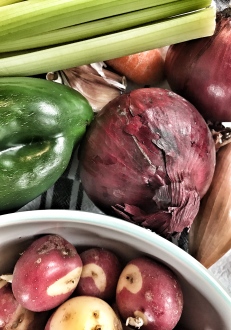 and resulted in a tasty dinner which went down well with both vegan, and the non-vegan, diners. It reminded me how much this particular book had been my vegetarian cooking primer for many years. Three pages on from the hotpot recipe I found the one for vegetable curry. I followed this recipe for years and remember well the first time I made it, up in the fifth floor kitchen of our halls of residence in Somerset Place. That first time led to an earth-shattering revelation: turmeric turns cauliflower yellow! A discovery so profound I made a note of it on the page of the book.

To conclude with a blast of pure hiraeth. I’ve lost touch with Jayne and Sarah. I did reconnect with Jayne when Friends Reunited was at its zenith, so about 15 years ago. A that stage she was back living in her beloved Westcliffe-on-Sea while directing her own PR company in London. We tentatively arranged to meet, but it never happened. She told me Sarah had married and emigrated to Australia – or possibly emigrated and married – many years ago. Sarah was the first contemporary I ever knew who had a credit card. Ahh, Sarah and her shiny Access card. I wish I’d kept in touch with her and Jayne. 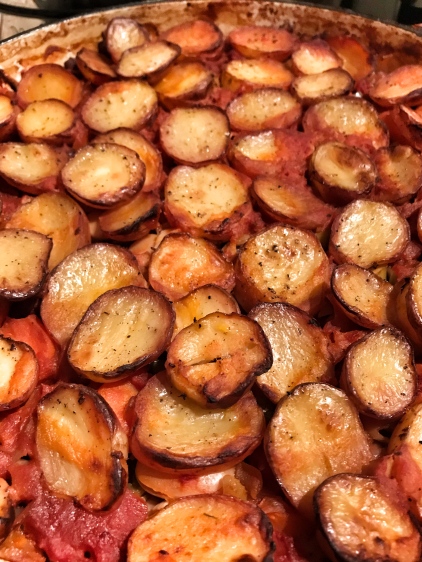